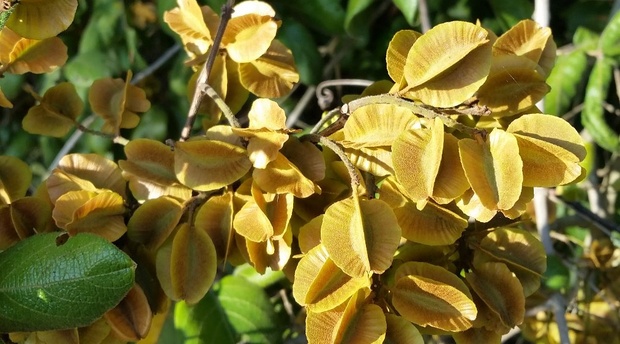 Bushwillow Collection gets its name from the Velvet Bushwillow tree ‘Combretum Molle’, which is endemic to the area and found in abundance around the chalets. Learn some interesting facts about the tree.....

The Bushwillow tree is common in Northern Kwa-Zulu Natal. It does not usually grow in groups, but where there is one there are often others close by. It is a deciduous tree (drops its leaves at the end of the growing season). It never gets very large or conspicuous, but can grow up to 12 metres high if the conditions are ideal. It is found in sand forest areas and survives well in sandy soils.

Bushwillow is a fairly fast growing tree but it is sensitive to very cold and frosty conditions. The Combretum family typically has simple leaves, small flowers and characteristic four winged pods, with a seed in the middle. It flowers in early spring (September - November). The flowers are small, yellowish and closely packed in long oblong, cylindrical spikes and have a lovely fragrance. The four winged pods are seen from December as green and through to August when they are ripe, turning reddish-brown in colour.

Traditional Uses: The wood is hard and durable but because of its small quantities it is not really used for furniture or buildings: it is often used for axe handles and walking sticks. The seeds are poisonous and the boiled leaves produce a red dye, which is used in basket making. Other parts of the plant are used medicinally; extracts of the leaves and roots are used for the treatment of wounds, snakebite, constipation, stomach ailments and high fever. This tree is still important in traditional medicine today. Fresh or moistened dry leaves are used as dressings for wounds.

The leaves are eaten by cattle and various Game species. The Flowers attract a lot of insects and many species of Butterflies breed on this tree.

Why call it "Bushwillow Collection"? Apart from the fact that the tree occurs in good numbers around Bushwillow, we can also imagine that the wings on the pod indicate the points of a compass, and the seed in the pod is Bushwillow.

Just as the seed is at the centre of the pod, so is Bushwillow at the centre of things to do in the area, allowing one access to the attractions all around the region. Bushwillow is a good place to base one’s self to explore, whether it is Sodwana Bay in the north, St Lucia in the south, Hluhluwe Umfolozi Park in the west or False Bay in the east. Oh, and Bushwillow is easy to say, and hopefully remember for the great time spent exploring the area!