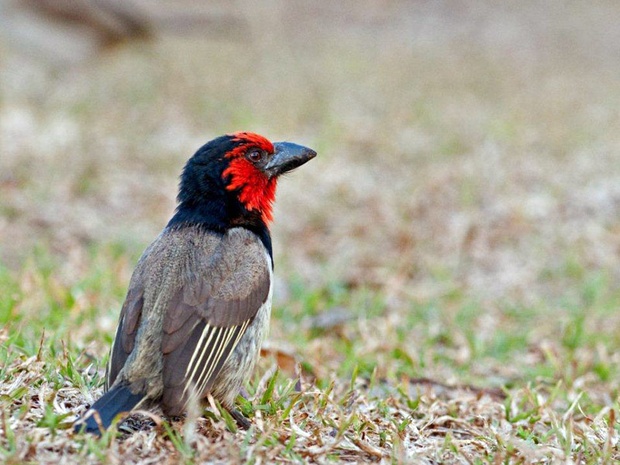 False Bay Park is situated 16 km North East of Hluhluwe and is one of the best birding spots in Zululand. The park is a fantastic spot for forest birds in particular, but there are also some interesting water birds to be found along the shores of the lake. Guests staying at Bushwillow can book a walk with Specialist Bird Guide, Ryan Tippett from Ukuhamba Guiding. Here is an account from Ryan of what you can expect to see.

The main attraction for birders is without doubt the pristine sand forests and the reserve protects some of the finest remaining stands. There are two types of sand forest in the reserve – Tall forest with large trees and an open understory, and shorter, dense forest with smaller trees and very thick undergrowth. Both contain many exciting species.

The big advantage here, over most other Zululand reserves is that the key habitats can be accessed on foot, either along the roads or the well-appointed walking trails.

A morning spent birding in the forest should produce many typical forest birds like : Dark-backed Weaver,  Yellow-bellied Greenbul, Red-capped Robin-chat, Crowned Hornbill, Tambourine Dove, Crested Guineafowl, Square-tailed Drongo, Black Saw-wing, and Yellow-rumped Tinkerbird, amongst others. Trumpeter Hornbills and Black-bellied Starlings are often heard as they move across the forest and remember to keep a look out for Crowned Eagles as they display high above the canopy

The summer months bring in the migratory birds, including African Emerald Cuckoo which can be heard everywhere but is remarkably hard to see.  Scan any exposed dead trees for Broad-billed Rollers. Their raucous calls usually give them away.

Many of the regions specials can be found here without too much difficulty. Eastern Nicator, Bearded Scrub Robin, Rudd’s Apalis, Gorgeous Bushshrike and African Yellow White-eye are all quite common. Green Malkoha, Narina Trogon and Olive Bushshrike, while also common, are more often heard than seen.

Pink-throated Twinspots are present in good numbers but are sometimes difficult to find. They like forest clearings with grassy patches. Watch for them as they fly off from the pathways in these areas. It’s a good idea to learn to recognise their thin insect-like calls.

Sunbirds are well represented at False Bay with several species occurring. Neergaard’s Sunbirds are conspicuous when calling, but can be difficult to observe because they never sit still for too long. Plain-backed Sunbirds have been seen in the reserve. They are undoubtedly rare here, but I have seen them on two separate occasions in the tall climax sand Forest. Both sightings were of calling males. Look for them on the Ingwe and Mpophomeni trails.

False Bay is one of the very best locations for the peculiar African Broadbill. They are most easily detected in the early morning when they utter their strange frog-like calls during display. They are best searched for in the densely wooded drainage gullies along the entrance road and on the 10km long Mpophomeni trail.

The open water at False Bay is actually the north western extension of Lake St. Lucia. Look out here for both Greater and Lesser Flamingos and Pink-backed and Great White Pelicans. All of which can form large aggregations on the lake when conditions are right. Pied Avocets are also regular in large numbers, especially during winter. Many Caspian Terns breed here during winter but at least some birds are present all year round.  Be alert for the endangered Saddle-billed Storks as they stride purposely along the shore. At least one pair is resident on this part of the lake.

The narrow strip of grass and scrub between the water and the forest is good for Black-bellied Bustard, and with luck, Swamp Nightjar. This grassy strip is widest in the south, below the Dukandlovo Rustic Camp. Scan this area for Collared Pratincoles and Blue-cheeked Bee-eaters in summer. All three Longclaw species occur here, and the Rosy-throated Longclaw can be plentiful after the rains.

I have an extensive knowledge of the reserve and have actively birded in this reserve for the last 10 years. Should you want a guide, book your stay at Bushwillow Collection in either the Lodge, Boutique or Cottage and I will be delighted to look after your birding needs.